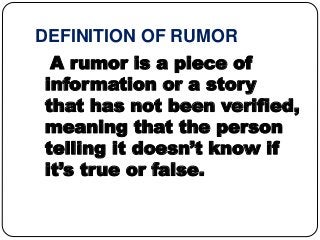 Rumor is a social communication process in which people spread information through word of mouth, mainly about a particular person, event, or condition. It is also an effective means of expression and satisfaction of the emotional needs of a group or community. Rumors can take on different forms, depending on their purpose. Some are topical, whereas others are purely humorous and are intended to make people laugh.

Some researchers find that rumors that are spread through a well-established organizational grapevine tend to be more accurate than those spread by people who are prone to exaggeration or self-enhancement. Some researchers also find that situational features of rumors can affect their accuracy. For example, soldiers in World War II field studies were able to ask their superior officers whether rumors they heard were true or false. Furthermore, the accuracy of rumors is affected by group mechanisms, such as the fact that rumors tend to be consistent with cultural axioms and ideas.

The word rumor derives from the Latin word rumorem, which means “noise”. The word rumor can be true, false, or even semi-true. In British English, rumor is sometimes spelled rumour. A person who is passionate about spreading rumors is known as a rumormonger.

Rumors can have many negative effects on individuals. These can range from reducing sales to fomenting riots. For example, a rumor that police chased a Native Australian on a bicycle led to widespread riots in Sydney. Another example is when a rumor about toxic water kept workers from assisting in a rescue operation. Organizational attitudes are also negatively affected by negative rumors. Consequently, rumors can have adverse effects on morale, productivity, and even the intention to quit.

The main cause of rumors is uncertainty. The uncertainty causes people to speculate and spread rumors, and the resulting anxiety promotes their transmission and discussion. People are more likely to share rumors they believe than those they do not believe. This is because people share a common interest in these topics. People pass them on to others when they think they are important.

Research on rumors has been done by several psychologists. Kimmel, Allan J., Michael Koller, and Prashant Bordia have studied the psychology of rumors in the marketplace. Their work has also focused on the sensemaking process that occurs at the individual level. They have studied how rumors affect perceptions and predictions in systematic ways.

Although teens cannot always avoid rumors, they can learn how to cope with them. One way is to confront the person who spreads them. However, it is important to find a way that is comfortable for them. A rumor can ruin a person’s reputation. Moreover, it can lead to relational aggression.

Though rumors are often detrimental, they are a useful source of social information and can help people understand the social dynamics of a larger group. In addition to being entertaining, they also help to strengthen the bonds between individuals.

What is a rumor? This is the term used for a story that is not true, but is spread among communities to promote an agenda or a social movement. The definition of a rumor is complex, incorporating transmission, content, and emotional needs of the community. It is impossible to understand a rumors in an individual’s […]

There are a variety of online slot machines available to choose from. These games start out similar to their land based counterparts, but advances in computer programming have allowed new types of games to be developed. Often, these games include unique layouts and themes. Some of them even include more than five reels. They can […]